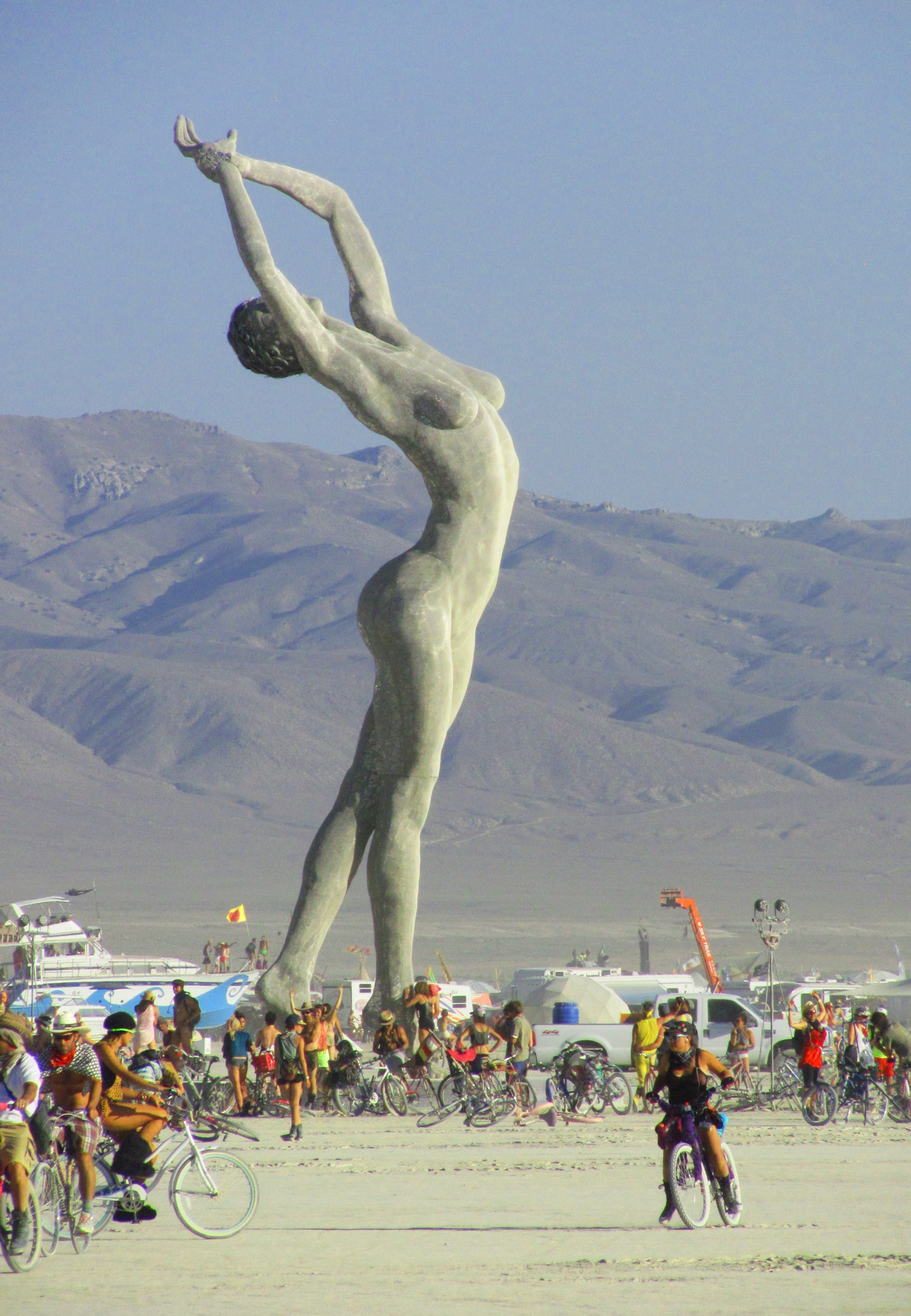 “We are sharing a bold idea that the world needs. It is a dream that many share and we believe we are now in the position to make it a reality.” – Marco Cochrane

Marco Cochrane’s sculptures Bliss Dance (40’ tall) and Truth is Beauty (57’ tall) are awe inspiring in their scale and execution. The unique combination of a programable LED array illuminating a stainless steel mesh, supported by a sophisticated interior ball and rod skeletal structural system, make these monuments to the human form a technological achievement in their own right. But, for Marco, their core meaning and power actually lies well beyond the compelling magnitude, light effects, and technological prowess of the work. With his forthcoming piece, R-Evolution (to be finished in 2015), Marco will complete a three act composition underscoring his dedication to a campaign for women’s empowerment at a global scale. At a recent Innovate Berkeley speaking engagement, in an intimate dinner setting, Marco talked candidly about his background and aspirations for how humanity needs to better align itself with feminine energies to avoid global collapse of the environment, financial systems, and human society as a whole.

“This is where it all started!”, commented Marco, referring to the tumultuous political and cultural shifts that were occurring during his upbringing in Berkeley in the late 60s and early 70s. As a pre-teen, Marco’s childhood naiveté about gender issues and sexual predation was shattered by the rape of a close neighborhood friend. In the horrific aftermath of this event, he developed a unique sensitivity to the ongoing global struggle against oppression and inequality that women in practically every nation face. Marco was born in 1963 in Venice, Italy, where his American parents were living as expatriate artists, but it was not until he was an adult that Marco’s creativity finally found its outlet through a dare, whereby he discovered his unique ability to express the core energy and essence of his human subjects through sculpture of the figurative form. Since then, Marco has honed his craft, expanding the scale and technical reach of his work, in part through his exposure to and inspiration from the Burning Man community, to spread his message of women’s empowerment to an ever-expanding following of awe-inspired admirers.

As the emotion rises in Marco’s discussion of his work, he is not talking about the cathartic satisfaction of manually interpreting the human form, nor the technical genius of the tapered ball joint structural system, nor the care with which he shapes the steel, nor the renaissance-based mathematical tools he uses for the scaling the forms, nor even the tantalizing use of data, light, and computer systems to execute the dazzling effects that illuminate the metallic skin of his creations. He is talking about injustice, the squandering of natural resources, dominance over the weak, and the fact that as a species time is running out for us to solve the problems that threaten our very existence on this planet. All of this, he relates back to the core belief that each of us is empowered with the means to accelerate a global shift, already underway, towards feminine tendencies that are manifest in movements towards conservation, equity, and collective resource sharing. 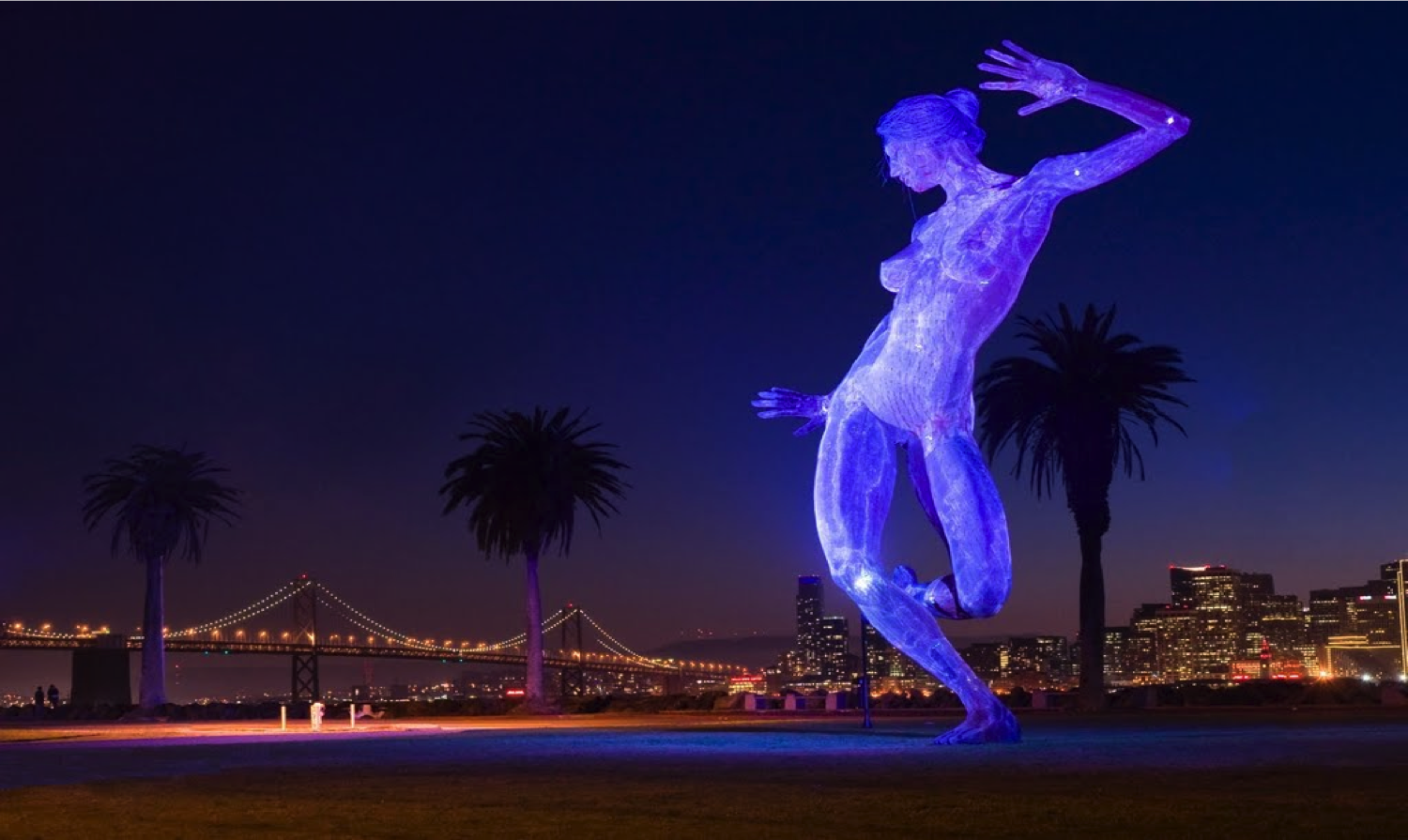 Marco’s intent is not to cast men negatively, but his frank discussion of masculine tendencies towards killing, domination, and hair-triggered violence as a response to real and perceived threats and shows of disrespect can be jarring. Even if some of his rhetoric sounds exaggerated at times, the core truth of his comments are born out by the reality of gender based imbalances in political and social power structures around the world, the ubiquitous threat of sexual assault and violence with which women live around the world (1 in 3 women will be assaulted in their lifetime), and the on-going tendency of institutions (like universities, corporations, and local government) to cover up or downplay sexual assault statistics to avoid bad press. While men certainly are not immune to this same violence, predation, and injustice, Marco argues that the male tendency of swift and violent response to perceived threats to their person, their loved ones, or their rights, is a core difference in how masculine power is manifest in the world.

Marco’s goal is as simple as it is ambitious. He wants to use the location and history of Treasure Island (created for the 1939 World Fair), in the middle of San Francisco Bay, as a focal point for prioritizing and solving the core global problems that we face as a species. To do this, he proposes to harness the core principals of sharing and transparency that underlie the Burning Man community, the financial might and industrial sophistication that is driving innovation in Silicon Valley, and the tremendous creative and technical human resources that are concentrated in the Bay Area. Together, these will ignite a critical mass of problem solving power that will inevitably attract additional talent and resources to the island from around the globe. This ‘Global Innovation Laboratory’ project is already underway, albeit in an exploratory phase. The ultimate goal is to present the findings and problem solutions as part of a 100 year anniversary celebration of the island in 2039, showcasing the power of the human potential when it is harnessed for the collective good of mankind.